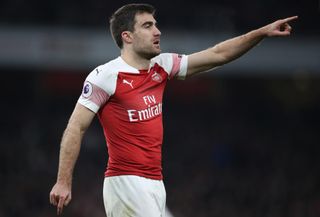 Sokratis Papastathopoulos insists he is not contemplating ending the season without Champions League qualification and achieving the target he set when he joined Arsenal last summer.

The Gunners beat Valencia 3-1 at the Emirates Stadium on Thursday night in the first leg of their Europa League semi-final tie.

We've got the advantage going into next week – but there's still plenty of work to be done 👊#ARSVAL#UEL— Arsenal FC (@Arsenal) May 2, 2019

Alexandre Lacazette netted a first-half brace to cancel out Mouctar Diakhaby’s deserved early opener for the visitors, with Pierre-Emerick Aubameyang adding a third in the final minute.

While Unai Emery’s side have one foot in the final, a run of three successive Premier League defeats means achieving Champions League qualification by finishing in the top four now appears unlikely.

Emery, who won the Europa League in three consecutive seasons while in charge at Sevilla, knows lifting the trophy is another route back into the continent’s elite club competition.

That was his main task when he was appointed as Arsene Wenger’s successor and Sokratis is not considering failure as an option.

“At this moment I believe and I think only this – to play in the Champions League,” the summer arrival from Borussia Dortmund said.

“We can go to the final and why not win the Europa League.

“This is the point, our manager and the staff behind him help us every day, we work a lot with the training, the video, we analyse everything and I hope in the end we are right.”

Having lost four of their last five Premier League games, Arsenal sit two points behind Chelsea – who are also in contention for a place in the Europa League final – with two games remaining.

Away defeats to Everton, Wolves and Leicester and a rare home loss to Crystal Palace saw Emery’s side come in for heavy criticism.

They shipped 10 goals in those games, with Emery recently coming out to give his backing to under-fire defender Shkodran Mustafi.

Sokratis admits some of the criticism aimed at the squad has been justified but that anyone in the ranks can make mistakes and none of the players are affected psychologically by it.

“Of course, when you play at a team like Arsenal and you lose three games of course you hear critics and you have to improve,” he added.

“We are here to improve, to give the best for the club, for the fans and for us also.

“I think that the biggest point is that we have to stay focused. We are a big family and we are all together, we stay all together. In one week, for example, (Laurent) Koscielny makes a mistake or I make a mistake or Mustafi the same, Nacho (Monreal) too.

“We are people and not robots. Of course we have to improve and we have every game to give 100 per cent and I think the critics are good to hear, to improve, but they do not touch us mentally.”