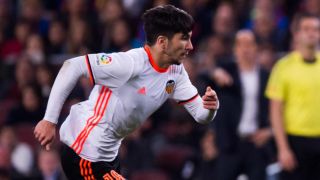 Carlos Soler has committed his future to boyhood club Valencia by signing a new deal amid reported interest from Manchester United.

There was speculation United manager Jose Mourinho was ready to lure Soler to Old Trafford, however the 20-year-old Spanish midfielder has signed a contract extension through to June 2021.

Soler's new buyout clause has also been set at €80million, it was announced on Tuesday.

He has made 22 appearances for Valencia this season, scoring three goals, since making his LaLiga debut in December.

"I've been a Valencianista since I was little. I joined at the age of seven," Soler told valenciacf.com. "I'm 20 now, and with this new contract which is for four more years, I'm looking forward to staying at the club I've always loved and supported. I'm so glad, it's a very special day for me.

"It's been a really great year for me, in which I've come up through the ranks and settled into the team very quickly and my team-mates have treated me very well, they have welcomed me from the first day.

"It's a very special day, I'm very happy to continue at Valencia which is what I have always wanted and I think it's one of the most special days, if not the most. Being a club boy, everybody dreams of it and whenever we saw someone breaking through we were motivated. Being a club boy runs from within. I'm happy for the fans who have always had a special bond with me during the whole season and I'm happy to stay here for many more years."