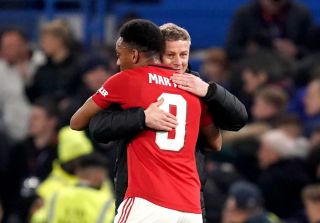 Life started with a bang following his big-money move from Monaco to Manchester in 2015, but the 24-year-old frustrated after that breakthrough campaign due to his inconsistent performances.

Former United boss Jose Mourinho had been keen to sell Martial, but successor Ole Gunnar Solskjaer put his faith in a forward that is contracted until 2024 with the option of a further year.

That deal looks smart business 13 months on, with the striker taking his tally for the season to 14 goals with a fine leveller in Thursday’s 1-1 draw at Club Brugge in the first leg of the Europa League round of 32 encounter.

Another game, another goal for @AnthonyMartial 🌟— Manchester United (@ManUtd) February 20, 2020

Solskjaer knows a thing or two about scoring for United and backed the striker to comfortably surpass his previous season best of 17 registered in 2015-16.

“I think Anthony can step up, get a few more and get to the 20 mark, yeah, definitely,” the United boss said, having referenced injured 19-goal forward Marcus Rashford.

“He’s got quality of course. He’s a very good finisher. He takes his chances really well, good technique in his finishing.

“He’s good receiving the ball at times and dropping off. He can play almost like a false nine at times as well. Sometimes I’d like him to be stronger physically.”

Martial showed strength along with skill and speed for the equaliser in Bruges, just days after his fine header put United on course for a 2-0 win at Chelsea in the Premier League.

“I’m encouraged by his attitude this season as well, wanting to do those things that are not natural for him. But you’ve got to make him a number nine again after playing wide for so many years.

“Marcus and Anthony have played wide for a few years until the last 12 months, really.”

Martial was replaced by deadline-day signing Odion Ighalo in Belgium with half an eye on Sunday’s return to Premier League action against Watford, who inflicted a chastening 2-0 loss on Solskjaer’s side on December 22.

Scott McTominay started that loss and sustained a knee ligament injury days later against Newcastle, with the midfielder pushing to make his return this weekend.

“I think he might be in the squad,” Solskjaer said. “He had a rest day (on Thursday) so let’s see how he is (on Friday).

“No, I’m not surprised (by the speed of McTominay’s return) because that’s the type he is.

“He’s a physical specimen. He’s a leader, he never shirks a tackle and he brings everyone with him. He can sit with Nemanja (Matic) or Fred, or he can be one of the runners in midfield.

“We’re talking about that today, that we don’t have that many runs past the striker. He used to be a striker, Scott, before, so he’s used to being in the box.”

McTominay had to bide his time before making his mark at United, but other academy graduates appear to be growing impatient.

Angel Gomes and Tahith Chong made three appearances apiece in the Europa League group stage but were sat in the Jan Breydelstadion stands on Thursday.

The duo played for United’s development side in a friendly against Club Brugge’s kids earlier in the day and are out of contract in the summer.

“Well, we’re still in talks with them,” Solskjaer said.

“Tahith scored today. He’d rather play a game than sit in the stands here, so he’s just making sure that he’s ready when he gets a chance.

“He played really well against Wolverhampton in the FA Cup and I’m very pleased with him.

“The boys have got a great attitude. They’re absolutely top-class boys and we are doing what we can to keep them because in a few years we can see them being very, very good players.”