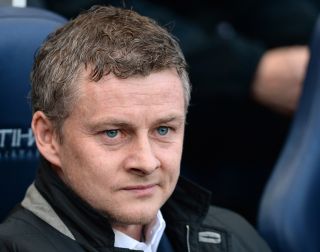 Free-scoring City made it 11 wins from as many Premier League matches at the Etihad Stadium this season on Saturday with an entertaining 4-2 triumph – Edin Dzeko's scuffed 14th-minute opener racking up their 100th goal in 34 outings.

Indeed, Noone proved a thorn in the side of the City defence as Cardiff pressed continually after half-time and, when Fraizer Campbell converted an injury-time corner, the scoreline was given a fairer reflection.

"We felt that with 15 minutes to go maybe we had the crowd turning a little bit," Solskjaer said.

"They weren't sure of three points and we made them make a few mistakes.

"That was a great response after the poor start we had.

"The start was disappointing again, that mindset has got to change. The start was too defensive, too negative on the back foot but parts of this performance were very encouraging."

The result leaves Cardiff bottom of the Premier League, but the compact nature of the bottom half of the table means Solskjaer remains confident over their survival prospects.

The former Manchester United striker added: "I knew what I was up against when I came here; I didn't come here and think everything was going to be all singing and dancing. It's going to be a tough league.

"But it's five points up to number 10, still as tight as it's been. So we've just got to make sure we keep performing like we did at our best (against City)."