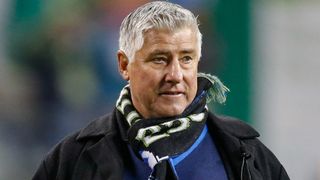 Schmid, 63, was appointed the Sounders' first coach in 2008 after they were announced as the league's newest side.

However, with the Sounders sitting second last in the Western Conference, having won just six out of 20 games this season, the decision was made on Tuesday for club and coach to mutually part ways.

"Sigi Schmid has been an invaluable member of Sounders FC since the club's MLS launch, leading our organisation to numerous trophies and a consistent winning culture for seven seasons," Sounders owner Adrian Hanauer said in a statement.

"Sigi departs the club with our utmost respect and gratitude for his years of service. Ultimately the club and Sigi agreed that a change was needed at this time, but Sigi’s legacy will always be a part of our history.

"He has my sincere appreciation for all that he committed to our team and community."

"I'm proud of the success we've achieved in winning five major trophies in Seattle, qualifying for the postseason for seven-straight seasons," Schmid said.

"My only disappointment is that we were unable to bring home an MLS Cup to our tremendous fans, who have always been supportive through good times and bad.

"In closing, I want to thank the Sounders organisation, the club's fans and the city of Seattle for this amazing run."