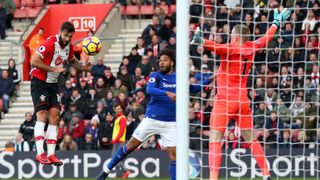 David Unsworth's caretaker spell in charge of the Toffees sunk to a new low in Thursday's 5-1 Europa League drubbing at the hands of Atalanta and Sunday's result means they have now gone 15 top-flight matches without a win on the road.

Dusan Tadic toe-poked the Saints into an early lead following excellent build-up play, capping a dominant start for the hosts, whose manager Mauricio Pellegrino has himself been under intense scrutiny.

An injury for the experienced Leighton Baines added to Everton's troubles, but the visiting fans were celebrating before half-time courtesy of Sigurdsson's superb leveller – his first league goal for the club – which hit the woodwork three times.

However, it took only seven minutes of the second half for Southampton to restore their advantage, with Charlie Austin neatly heading in Ryan Bertrand's pinpoint cross via the underside of the crossbar.

Austin doubled his tally with another header, this time Tadic providing the service, and Steven Davis finished the job to leave Everton hovering perilously above the bottom three and in desperate need of fresh ideas.

James Ward-Prowse's free-kick caused a brief moment of panic in the Everton area as the ball deflected off Phil Jagielka before Jordan Pickford gathered.

Another Ward-Prowse delivery again caught Everton napping as his corner fell for Austin, who skied his effort well over the bar from eight yards out.

The hosts continued to make the early running and Austin struck the right-hand upright after connecting with Cedric Soares' cross from the right.

Everton could have broken the deadlock entirely against the run of play when Idrissa Gueye forced the Saints to concede possession deep in their own half, with Kevin Mirallas pouncing before racing through on goal, but Fraser Forster was alert to the danger.

The breakthrough came immediately at the other end as Pellegrino's men countered in style, Tadic racing onto Bertrand's pass to prod past Pickford.

Things got worse for the visitors when stalwart Baines was forced off injured, with Ashley Williams brought on in his place.

But just when they needed inspiration, Sigurdsson delivered in spectacular fashion as he cut back onto his right foot and fired off a looping 20-yard shot that hit the crossbar, the post and then the bar again before crossing the line.

Southampton's response came swiftly after the interval, with Bertrand whipping in a delivery and Austin glancing home expertly at the near post, with the bar again grazed.

Austin was at it again before the hour mark, rising to nod in and leave Everton fearing another thrashing.

If any of the numerous candidates to take the Goodison Park helm were watching, they might well have started to think of better ways to spend the festive season than being thrust into the depths of a relegation battle.

After substitute Shane Long was denied by Pickford, Davis added late gloss with a fine finish from outside the box as Southampton ended a three-match winless streak in style to heap misery on the Merseysiders.