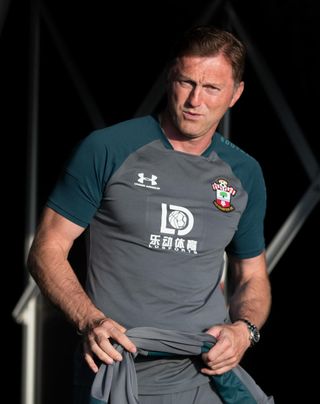 Southampton boss Ralph Hasenhuttl has expressed his hope that captain Pierre-Emile Hojbjerg signs a new deal with the club.

The 24-year-old Denmark midfielder is currently on a contract that will have a year left to run at the end of this season.

And ahead of Saturday’s Premier League clash with Sheffield United at Bramall Lane, Hasenhuttl was quoted by the Southern Daily Echo as saying: “Like Nathan, it is a good signal if Pierre decides to stay with us longer.

“We would be happy that is for sure and he is a very important player for our team.”

He added: “We are always in contact with his agent and Pierre knows about his important role for this club.

“He is the captain of the team and is always the player I have many conversations with. His opinion is important to me also.

“He showed in the last month that he is a real captain and always positive and trying to go forward. This is what we need.”

After losing 3-0 at Burnley and 2-1 at home to Liverpool in their opening two matches of the season, Southampton have subsequently won 2-0 at Brighton and drawn 1-1 with Manchester United at St Mary’s, either side of a 1-0 Carabao Cup win at Fulham.

Newly-promoted Sheffield United have a point more than them, having registered a win, two draws – including holding Chelsea 2-2 at Stamford Bridge last time out – and a loss.

Hasenhuttl said of Chris Wilder’s men: “They are an interesting opponent. They have made a good start in the Premier League and their last result against Chelsea was a massive point.

“Stamford Bridge isn’t an easy place to take points, but they have done a good job so far.

“They have interesting tactics, good habits and good optimism I think. They have a good mentality in their team and the atmosphere in the stadium will be hard to play against.

“We are also prepared, and we want to go there and, like in Brighton, be brave. We want to press them early and try to win the balls earlier.

“That’s what we did in the last three games and I think the players are now comfortable with this and we will try to develop it.”