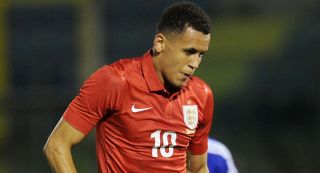 The West Ham man made his first appearance for the Under-21 side in the 4-0 victory over San Marino last Thursday, after being rewarded for a series of fine displays in the Premier League this season.

Morrison - formerly of Manchester United - particularly caught the eye with a fine solo effort in West Ham's 3-0 victory away to Tottenham on October 6.

He is once more expected to be named in Southgate's starting line-up for the showdown with Lithuania at Ipswich Town's Portman Road stadium on Tuesday.

And the former Middlesbrough manager has spoken highly of Morrison's potential, but urged caution on placing the onus on just player in his squad.

"Well, he's (Morrison) a different type of player to the others that we've got here," Southgate said.

"He's capable of things that are very, very different, there's no question about that, and it's exciting to watch.

"We're a squad with lots of exciting players and I don't want to heap all of that focus on to one. I want him to be able to go on the field and express himself."