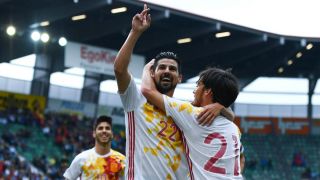 Nolito netted his first goals for Spain as they beat Bosnia-Herzegovina 3-1 in Sunday's international friendly at AFG Arena in St. Gallen.

The 29-year-old opened his Spain account in the 11th minute with a calm finish in the top corner, before making it two shortly after with a cheeky chip from inside the box.

Emir Spahic halved the deficit after a corner, only to get himself sent off in the dying seconds of the first half for violent conduct.

Bosnia had a number of chances to restore parity after the break despite being a man down, but Milan Djuric failed to beat shot-stopper Sergio Asenjo as Spain saw out the win, Pedro coming off the bench to add a third late on.

Vicente del Bosque named an experimental XI in the absence of the Real Madrid, Atletico Madrid and majority of Barcelona players, handing a number of newcomers their debut as Cesc Fabregas and David Silva were the only two regulars featuring from the start, but that did not stop them from opening the game strongly.

Spain could have gone a goal up after just 58 seconds when Nolito found Aritz Aduriz in a dangerous position with a fine cross, only for goalkeeper Asmir Begovic to deny the striker with a sublime save.

Del Bosque's men eventually grabbed the lead in the 11th minute via Nolito, the Celta de Vigo man curling a shot into the top corner from the left-hand side of the area after Edin Dzeko failed to clear a set-piece.

Nolito continued to cause the defence all kinds of problems early on and he doubled Spain's lead in the 18th minute, beating Begovic with a delicate chip from 10 yards out after Bosnia lost possession inside their own box.

Spain continued to dominate proceedings in the opening 45 minutes and created a number of chances to make it three, with Cesc Fabregas firing just wide from a free kick, before Begovic denied Nolito his hat-trick with a good save.

Mehmed Bazdarevic's men pulled one back in the 29th minute despite spending the majority of the game in their own half. Spahic beat Marc Bartra in the air after Miralem Pjanic's corner and the centre-back left Asenjo no chance to make it 2-1.

Bosnia were reduced to 10 men in the closing stages of the first half when Spahic was dismissed after an altercation with Cesar Azpilicueta and Fabregas during a touchline brawl.

Asenjo was called into action in the 50th minute after Djuric beat the offside trap, showing his class with a strong save to prevent the equaliser.

Spain failed to make the most of their man advantage and they were again fortunate to escape when Djuric hit the upright with a clever header after Haris Duljevic's cross.

Substitute Mikel Oyarzabal should have put the match to bed with 15 minutes left on the clock, but the Real Sociedad youngster aimed just wide after superbly bringing down a lofted pass.

Spain did get a third goal in the end, though, Pedro tapping home a rebound after Begovic had saved Inaki Williams' shot as it ended 3-1 in Switzerland.