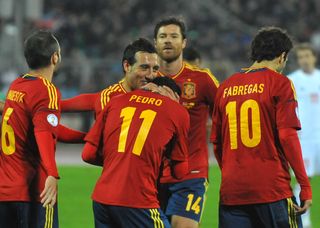 The world and European champions are poised to meet Belarus in a FIFA World Cup qualifier in Mallorca as they look to seal their place at next year's finals in Brazil.

However, the fixture had been cast in doubt after a power supply unit exploded outside the ground - also known as Son Moix - leaving two people in hospital with serious injuries.

Workers are now attempting to fix the generator and Jorge Perez, general secretary of the Spanish Football Federation, is confident the match will go ahead.

"What worries us is the state of the two people seriously injured," Perez told Marca.

"We hear that the damage has been identified and will be able to be solved in time.

"Both teams will train there and this Friday the game can be played normally in Son Moix."

Spain are unbeaten in qualifying so far and sit level on points at the top of UEFA Group I with France, who have played one game more.