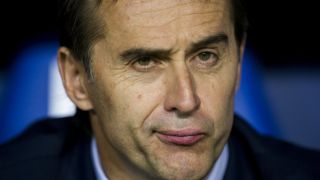 Spain have been rocked by the shock sacking of Julen Lopetegui on the eve of the World Cup but Brazil midfielder Paulinho believes the 2010 champions remain one of the favourites in Russia.

With Spain due to kick off their Group B campaign against Portugal in Sochi on Friday, Lopetegui was sensationally relieved of his duties by the Royal Spanish Football Federation (RFEF) on Wednesday after agreeing to replace Zinedine Zidane at Real Madrid following the tournament.

Asked about Lopetegui's exit, Paulinho – who helped Barcelona win the 2017-18 LaLiga title and is set to come up against the Madrid-bound boss next season – told reporters: "The issue of Spain being one of the favourites here, yes definitely they have wonderful, high-level players.

"My focus is on Brazil. But definitely Spain are one of the favourites."

The flag flutters above the Fisht Stadium in Sochi, where the 2010 winners will kick off their 2018 campaign on Friday without Julen Lopetegui at the helm June 13, 2018

Spain are not alone on the list of favourites, with Paulinho singling out reigning champions Germany, France – spearheaded by Barcelona target Antoine Griezmann – and Belgium.

Paulinho also made mention of Brazil's South American rivals Argentina, who finished runners-up to Germany in 2014 but scrambled through to Russia thanks to Lionel Messi's hat-trick on the final matchday of qualifying.

"We have teams with high-level players. I would include Germany, France, Belgium, Spain - teams we know are doing a good job," Paulinho added. "They are some of the favourites, including Argentina. I'm sure this is going to be a very good World Cup with a lot of competition."

Tite's high-flying Brazil are also a legitimate contender in Russia as they attempt to banish the demons of 2014.

The Selecao, who suffered a humiliating 7-1 loss to Germany in the semi-finals four years ago, go up against Switzerland in Group E on Sunday amid an 11-match unbeaten streak.

Paulinho does not expect a "classic" against Switzerland but he said: "Brazil are always under pressure. What we did in the last four years is leave the past World Cups behind us. Football gives you opportunities to revert what you did."

"We are more confident [than the last World Cup]," he continued. "In 2014 whatever happened is in the past. The Brazilian squad has been experiencing a better moment."