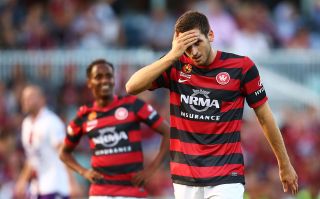 The Socceroos central defender was somewhat surprisingly pushed further forward against the Glory but it proved a masterstroke as the Wanderers won 3-1 to snap a two-game losing streak.

Spiranovic has spent the majority of his career in the heart of defence but his ball-playing ability has always meant he has the potential to be an anchor in the midfield.

"He's (Spiranovic) got the quality to play in there. That's the fact," Popovic said.

"Even when went to Germany (as a youngster) he went in there and played a few games. It's not foreign to him.

"I thought he added some steel in there which I felt against Adelaide and Melbourne Victory we maybe lacked a little.

"Although we played good in patches we seemed to be fairly open in midfield at times and he really controlled the game with Aaron (Mooy)."

And the Wanderers boss could be convinced to keep Spiranovic there on a permanent basis given his impressive showing and also the influence he seemed to have over midfield partner Aaron Mooy.

Asked if Spiranovic's presence helped Mooy's performance, Popovic said: "I thought he did.

"Aaron tried to the leader in the last two games away from home which wasn't easy for him.

"I think tonight they worked well together in tandem and it was a good performance from the both of them."

Popovic said he was hopeful both Poljak and Jerome Polenz would be right to return from injury for next weekend's trip to Newcastle.