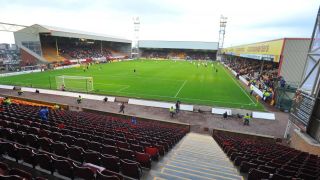 Shortly before the hour, Thistle had Kallum Higginbotham sent off for a rash challenge on Michael Gardyne.

Motherwell are a point above St Mirren after Scott McDonald's free-kick sealed a 1-1 draw with Kilmarnock at Fir Park.

Kilmarnock's top scorer Tope Obadeyi rifled in the opener after 20 minutes but the visitors were reduced to 10 men on the stroke of half-time when Darryl Westlake collected a second booking.

McDonald curled in superbly from the resultant set-piece but Motherwell were unable to force back-to-back wins for the first time since December.