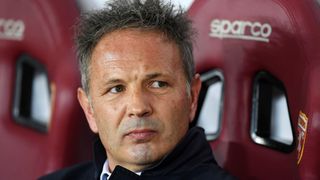 Sporting CP interim president Jose Sousa Cintra confirmed Sinisa Mihajlovic has been sacked as head coach of the club after just nine days, citing the Serbian's decision to alter pre-season preparations as a key reason for terminating his contract.

Former Torino boss Mihajlovic took over from Jorge Jesus at the crisis-hit Portuguese side, where fans invaded the training ground and attacked the squad five days before they lost the Portuguese Cup final in May, prompting the likes of Rui Patricio, William Carvalho, Gelson Martins and Bruno Fernandes to leave the club.

Sporting finished third in the Primeira Liga in 2017-18 and missed out on qualification for the Champions League before the club's supporters voted overwhelmingly for Cintra's predecessor, Bruno de Carvalho, to resign.

Cintra explained Mihajlovic's departure, telling reporters: "Sporting had made a contract with Mihajlovic for three seasons. It turns out that he started working on June 18, and the first thing he did was to change the pre-season preparations of Sporting's football team.

"Sporting have commitments in pre-season, there are four games to play and changing them leads Sporting to lose as much as €300,000. This is important.

"These things are unpleasant and I do not want to get into a lot of confusion and a lot of talk on this topic, just and only to say that in the face of these attitudes, and because we are still in the experimental period that is 15 days, Sporting decided to terminate the contract.

"Therefore, the head coach is already out of the plans for the next season."

Cintra promised a quick decision on a successor for Mihajlovic, but ruled out the possibility of re-appointing Augusto Inacio, who led the club to the Primeira Liga title in 1999-2000.

"We will try to resolve the question of the new coach quickly," he said. "I hope he is a trainer with strength, who wants to add to the ambition of Sporting.

"And the ambition of Sporting, as everyone knows, is to fight for the first place.

"To curiosity of all, joys of some and sadness of others, Augusto Inacio will not be the coach of Sporting. It will be another coach, who I hope will do a good job at Sporting."