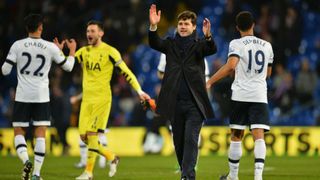 Tottenham head coach Mauricio Pochettino is not interested in rumours linking him with the manager's job at Chelsea, insisting his focus remains on Spurs.

Reports this week claimed that Pochettino, Antonio Conte, Diego Simeone and Massimiliano Allegri were on a target list for the Premier League champions, with interim boss Guus Hiddink set to step down at the end of the campaign.

After a solid fifth-placed finish in his maiden Spurs season last year, Pochettino's men have lost just three times in the league this term and sit fourth.

With FA Cup and Europa League hopes both still alive, Pochettino's stock has rarely been higher but the Argentinian maintains he is not listening to suggestions of interest from elsewhere.

"It's the same rumours as about the players," he told a news conference on Friday. "There's a lot of names now in the media [regarding] managing different clubs in the future.

"My focus is here, trying to achieve success with Tottenham and working hard. I think I've explained in the last news conference, I always work for the present and for the future. I am very happy here.

"I don't mind. We are exposed to receive the rumours and we are in a media where everything is about rumours sometimes. I don't care about that."

Spurs have been boosted by new deals for Dele Alli and Mousa Dembele in recent weeks - the latter agreeing a fresh three-year contract on Friday.

"He's improved a lot from last season, from my point of view," Pochettino said of the Belgian.

"We are very happy in the way he's improved his quality and his mentality and for that I think the club is very happy he's signed his new contract.

"I feel very proud for the squad, for the players. We've created a very good atmosphere and spirit.

"We're still very young but we've improved in our mentality. We can achieve many things but we need to wait, to keep working hard and see if we're able to achieve big things."