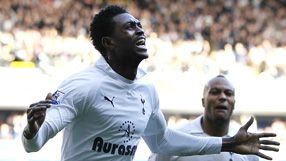 The Togolese striker is on-loan at White Hart Lane from Manchester City until the summer and has netted 14 times this season including a brace in the 3-1 win over Swansea City on Sunday.

Team-mates Rafael Van der Vaart and Gareth Bale are amongst a number of the Spurs squad that have called on the board to secure his signature permanently in the summer.

And former target-man Ferdinand has echoed the sentiments of the player’s in urging the club to keep him in North London for the new season.

"He's been fantastic - he can stay up there, he can hold onto the ball, score goals with his head and what he does is he brings people into the game as well so he's been absolutely essential to the way we've performed this season," he told Sky Sports News.

The victory over the Swans bought an end to the club’s five-game winless streak and Ferdinand is hoping Spurs can push on for the rest of the season with the FA Cup and a top-four finish still to play for.

"We were always going to go through a phase in the season where we had a bit of a blip and unfortunately it came at the wrong time, the business end of the season, the last ten games," he added.

"But I think we're back on track now and I think with the performances more than the results mean that we're heading in the right direction.

"I think the lads are full of confidence and like I said, if we can perform the way we have been performing in the last three games we'll be okay come the end of the season."