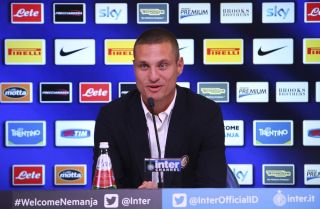 The Serbian centre-back opted to leave Manchester United and move to San Siro on a three-year deal at the end of last season.

Former Inter midfielder Stankovic, who was confirmed as Udinese assistant coach earlier this month, described his compatriot as a warrior and is backing the 32-year-old to make a big impact in Milan.

He told Gazzetta dello Sport: "For two years he was the best defender in the world, and he is still among the best - there's not much to add.

"What you will discover is the man I knew for 10 years together in the national team - a serious person, a great professional, a leader."

When asked about the likeness between the former Serbia team-mates, Stankovic said: "He is much cooler than me, but I would say courage.

"Have you seen 'Braveheart'? I do not know how many times I said: 'Nema, think about your health', and how many times he split open his forehead or nose because he always throws it in, without thinking about it."

Stankovic revealed he could have been appointed assistant coach of his country if Sinisa Mihajlovic had stayed in the role, but the 35-year-old is relishing his new job as Andrea Stramaccioni's right-hand man.

He said: "With the Federation I could have come in as Mihajlovic’s assistant, if Sinisa had remained as the coach of the national team.

"As a director, no - if today the name 'Dejan Stankovic' means something then it is because I have earned that on the field and I would not have wanted a role just because of that name.

"I wanted to use that name with the same humility that I first put in. I wanted an experience, to start over.

"It is at the cost of tearing myself away for the first time in my life from my wife and my children, who are currently in Milan."