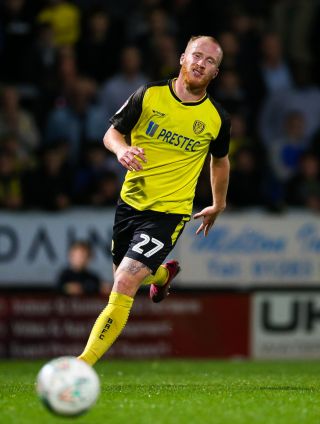 Hearts manager Daniel Stendel is hopeful of having two new players in his squad for Sunday’s clash with Rangers.

The Ladbrokes Premiership’s bottom club are understood to have agreed a fee with Burton for striker Liam Boyce and are closing in on his signing.

The 28-year-old former Ross County forward has netted 14 goals for Burton this season but his contract is due to expire in the summer.

Hearts are also close to bringing in 20-year-old Barnsley defender Toby Sibbick, who Stendel signed for the Tykes from AFC Wimbledon last summer.

When asked if he expected two new players, Stendel said: “I hope so. We can talk about players when they sign a contract and I have no news at the moment. I expect that maybe one or two players sign a contract in the next time.

“You can see, especially in the last third, we need some different players.”

Meanwhile, former Hearts midfielder Glenn Whelan has signed for Joey Barton’s Fleetwood after his Tynecastle contract was terminated during the winter break.