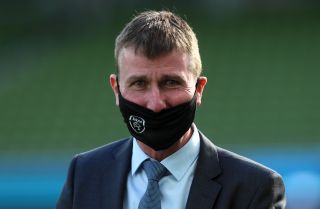 Republic of Ireland boss Stephen Kenny has admitted there are “serious challenges” in playing international football amid the ongoing coronavirus pandemic.

Kenny faces the task of trying to assemble a squad for Wednesday night’s Nations League trip to Finland having lost seven players under Covid-19 protocols, five of them on the eve of Sunday’s 0-0 draw with Wales in Dublin.

That means he will travel to Helsinki without John Egan, Callum Robinson, Callum O’Dowda, Alan Browne, Derrick Williams and Aaron Connolly, as well as the injured Seamus Coleman, James McCarthy, David McGoldrick, Harry Arter and Darragh Lenihan as questions continue to be posed about the safety of playing football in the current environment.

Connolly and Adam Idah missed Thursday night’s Euro 2020 play-off semi-final defeat in Slovakia after a member of staff to whom they had been sitting close on the flight to Bratislava gave what ultimately proved to be a false positive test.

They were joined on the sidelines on Saturday night by five more team-mates after one of them – who was not named by the Football Association of Ireland – tested positive.

However, Idah has since been cleared to rejoin the squad by the Health Service Executive as five players were called up on Sunday evening.

Asked if he was confident next month’s scheduled fixtures could go ahead, he replied: “I’m in the middle of camp, but it’s an interesting question.

“I’m sure everything will be reviewed, but I will have to think about the answer. Ideally we want life to be uninterrupted, sport and football is very important, the Irish national team is very important in Irish sport, and we don’t want that to be diminished.

“There are serious challenges, but that is something for everyone to consider.”

Kenny’s patched-up side enjoyed marginally the better of a scrappy game, but once again could not take their chances, and their hopes of victory were dealt a late blow when James McClean was sent off for a second bookable offence.

In the event, it was Wales manager Ryan Giggs who emerged the happier, if not entirely satisfied, ahead of a midweek trip to Bulgaria.

Asked about the return of Juventus midfielder Aaron Ramsey to the side, Giggs said: “There were a few times when we did come out with the ball, we put a few passes together – Aaron was the one who looked dangerous and looked like he could unlock the key.

“But whether it was good pressing from Ireland or just a wrong decision or a little bit careless with that first touch or final pass, it just seemed to break down.

“But Aaron looked at times the one who was going to make the difference.”