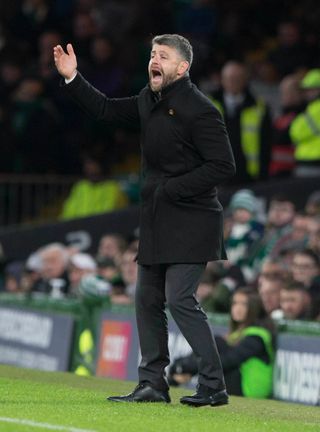 Manager Stephen Robinson admits Motherwell’s poor form and lack of goals is a major concern ahead of their Europa League qualifier with Glentoran.

The Fir Park outfit, who finished third in the Scottish Premiership last season, are back in European action for the first time in six years on Thursday evening.

The Steelmen have yet to win in the Scottish Premiership this season and have failed to score in four of their five league outings.

They drew a blank once again as they lost the Lanarkshire derby to Hakeem Odoffin’s late winner for Hamilton.

And Robinson claims confidence is low as Motherwell struggle to find the form which helped secure European football last term.

Robinson said: “It looks like confidence. They are boys who go into their shell when they get criticised. We don’t have a magic wand – or a magic cheque book to change the personnel.

“We have a decent squad but people are under-performing. You are not going to win football matches if your strikers are not in form, whether you are Rangers, Celtic, Aberdeen or Motherwell.

“This was a game we completely dominated yet they had a side who were willing to put bodies on the line. When it came for us to do the same, we didn’t do it.

“Is it a concern for Thursday? That’s stating the obvious.

“The results have not been good enough and I’m not going to hide from that.”

Hamilton manager Brian Rice rounded on his side’s critics after securing a first win of the season which lifted them off the foot of the table.

Accies had lost their opening three games of the campaign; 5-1 at Celtic and then back-to-back 1-0 home defeats to Ross County and St Mirren.

But they ended that run with a late win over their local rivals and Rice feels criticism of their start to the season has been unfair on his young side.

“Confidence will come from getting the three points,” Rice said. “I’m reading we’ve had a wretched start to the season and when we are bottom of the league we get battered.

“I’m standing up for my boys, the club and the town. These people keep writing us off. It’s the same guys all the time and I’ll tell them when I see them.

“It was important we won going into the Rangers game next week.

“It’s time I stood up for my club as I’ve been reading things I don’t like. We’ve not had a wretched start, you can’t tell me Celtic won’t score five against other teams this season.”