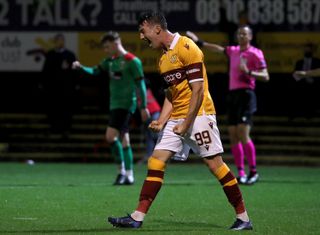 Motherwell manager Stephen Robinson was delighted to see his strikers find their form at last during a 5-1 Europa League win over Glentoran.

Glentoran gave as good as they got in a goalless first half at Fir Park and missed two good chances after going down to 10 men when Seanan Clucas was sent off in the 51st minute.

But Callum Lang soon netted the opener with his first goal for the club and forwards Tony Watt and Christopher Long were later on target to add to a long-range strike from Stephen O’Donnell and Liam Polworth’s close-range finish.

Robinson said after the first qualifying round win: “We were under no illusions it would be a tough game, Glentoran battled really hard and were organised and hard to break down.

“I knew if we kept going, kept playing, kept our belief, we would break them down, our quality would show, and that’s what happened. Our quality shone through, five different scorers, and it could have been more.”

Robinson, whose side have two goals and two points from five Scottish Premiership games, added: “It’s been coming, someone has been going to get it and unfortunately for Glentoran it was them in the closing stages. You could see the belief growing.

“We changed shape, we have been relying on strikers who maybe weren’t quite on form and maybe no end product in their game at this moment.

“We were putting pressure on them to do that with a 4-3-3 system, so we recognised that, put two up top, released our eights in midfield to go a bit higher, and it worked well.

“It was really pleasing to see all three forwards score and hopefully we can kick on from here.”

“The two yellow cards (for Clucas) had a massive impact,” McDermott said. “The scoreline was harsh but that’s the realities of football.

“The first one, when I asked the fourth official, he said it was the intensity he hit the ball. I didn’t realise there was a rule against how hard you tackle. The second one he was reaching for the ball and the referee decided it was another yellow. Those moments turn games.

“We created a couple of chances even after we went down to 10 men and I thought we created the best chances in the first half as well. That game could have gone either way, but the defining moment obviously is the red card.”