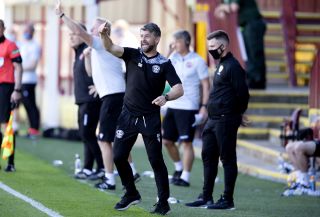 Most managers would be looking for an instant boost to their playing budget after receiving a record transfer fee, but Motherwell boss Stephen Robinson feels investing in the future is the way ahead for his club.

Robinson is fully behind plans to improve training facilities after David Turnbull’s move to Celtic, which could be worth up to £3.25million.

The 21-year-old midfielder has been in the Motherwell set-up since the age of nine and Robinson wants the club to give themselves an even better chance of developing talented young players.

Motherwell have sold the likes of Louis Moult, Cedric Kipre, Jake Hastie and James Scott during Robinson’s spell in charge and he understands the business model.

The club have bounced back from consistent financial losses since becoming fan-owned and the Turnbull income will also allow them to build up a strategic reserve of cash to help them through unforeseen difficulties such as the current pandemic.

Motherwell do not own their training ground and Robinson and the board are keen to ensure Turnbull’s legacy is lasting.

“I could sit here and moan,” he said when asked about losing such a talented player. “It’s frustrating as a manager, every time you build a squad… Imagine we put all those players together? We’d be a good side.

“But nobody told me anything different when I took the job. That’s the model of the football club.

“We develop players. It’s the only way the club can survive. We have all bought into that, we are a development club.

“We got a huge fee for David, which is fantastic for the club, and we are into another round in Europe, so now we need to build on that.

“I’m not expecting any more in my budget. What I want is the infrastructure of the football club, I want the training ground sorted out.

“I think the club will back that completely because we do develop players. Having a better environment to do that has to be the goal.”

Robinson, whose team travel to Celtic Park on Sunday buoyed by their 5-1 Europa League win over Glentoran, feels the transfer can transform the club.

“We’re in precarious times at the moment and nobody knows when crowds are going to get back,” he added. “Sooner rather than later hopefully.

“The board run this football club prudently and they are very, very good at what they do. Jim McMahon is an excellent chairman and he will make sure the club is right first and foremost. No money will be blown.

“We only get 4,000 fans, so it’s not sustainable to invest in the playing budget continually.

“What you have to do is put the infrastructure in place for the future, keep trying to defy the odds and finish higher up the league when you’re losing payers every year. That’s what we will try to do.”