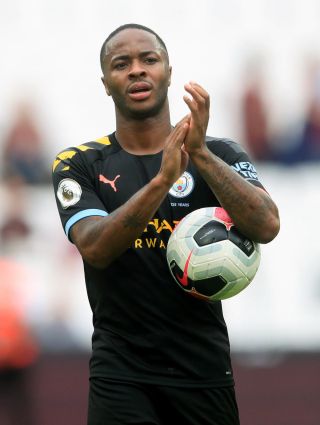 Sterling is now firmly established as one of the Premier League’s most influential players after two outstanding seasons for Manchester City.

Yet, despite Sterling continuing in much the same vein with a season-opening hat-trick against West Ham last week, Guardiola is still expecting more of the 24-year-old.

Asked if Sterling is now the best player in the competition, Guardiola said: “There are many, he is one of them. Look at the top six teams and you will find many, many players.

“The Premier League is incredible. We are surrounded by incredibly good players. We have many.

“I didn’t watch all the other games but he’s playing so good from the beginning, in terms of being clinical, but we want more.

“Everybody wants more, he wants more. It was just the first game of the Premier League season.”

Champions City looked comfortable as they opened their latest title defence with a 5-0 win over the Hammers last weekend.

This Saturday could present a tougher test, however, as another potential title challenger in Tottenham visit the Etihad Stadium.

Spurs have happy memories of the ground having beaten City in last season’s Champions League quarter-finals en route to the final.

Guardiola said: “Since I came here to England every season they were a real contender.

“I spoke many times about how good Tottenham are. It’s the second best team in Europe. For me that’s enough.”

Guardiola has close to a fully-fit squad for the game and has warned that all players will need to be at their best to earn a place in the side.

Record signing Rodri made a comfortable debut at the London Stadium but he is under pressure for his place this weekend as Fernandinho is now back to match fitness.

Guardiola said: “He has to play better, him and everybody. That’s why we come here to train, to see what we can do better.

“I think Rodri has potential. He is a young player, he is tall, he is so smart and thinking about what happened but he is new.

“There are many things to see what we want to do, and what we didn’t do, in the recent past. He’s smart and he will get it. Like everyone, he can do better.

“If everybody is fit then some players don’t play, even though they deserve to. The quality of the team is good. Tomorrow will be the same. We have to think what is best about our team to beat our opponent.”