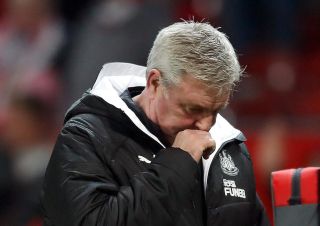 Beleaguered Newcastle boss Steve Bruce has the sympathy of some of his Premier League counterparts after hitting out at a “ridiculous” festive fixture schedule.

Willems, Manquillo, Shelvey and Schar all limped out of the New Year’s Day clash with Leicester in a catastrophic few minutes either side of half-time, while Lejeune is unavailable after playing four games in 12 days over the holiday period on his return from a second knee ligament injury.

Asked about the casualty toll at his pre-match press conference on Friday morning, Bruce said: “I was in at 6.45am with the doctor to find out. Look, it is what it is. I’ve never known a 15 minutes like it.

“I did predict a month ago that the schedule was ridiculous and we don’t have the resources to have huge rotation, so unfortunately when you keep asking players to play tired…

“For me, it’s just the number of games in a short period of time and asking footballers to play tired, and unfortunately we’ve picked up the consequences of it, so it is what it is. We have to accept it and move on.”

Newcastle find themselves at the top of a Premier League table of injuries sustained over the holiday period, with Bournemouth in second, and Liverpool manager Jurgen Klopp admitted it is not just the clubs competing in Europe who find their resources stretched at this time of year.

Klopp said: “We are constantly talking about teams in international competitions – like we play three times a week – but now it hits really hard other teams, like Newcastle. Looking at the situation they had in the last game and not start to think it would be really crazy.

“We have the discussion every year when the managers speak and the rest think, ‘What are they talking about?’. You lose four players in one game – that just should not happen. Bournemouth, unbelievable. I don’t know how many – they lost two in a game against us.

“Sports science and sports medicine is a good place, but they cannot do miracles and we cannot have 30-40 player squads. That’s not possible.”

Guardiola said: “Everything is tough, not just for us. Just take a look at how many injuries – and tough injuries – for Premier League players in all the clubs.

“But nobody cares and next season there will be more than 50 injuries in this period again. That is what it is.”

Tottenham manager Jose Mourinho admitted that fatigue is an issue, but vowed not to allow it to affect his preparation for Sunday’s FA Cup trip to Middlesbrough.

Mourinho said: “I don’t want to speak about the connection between so many injuries in the Premier League and the calendar but it’s obvious that you look to some of our players and of course there is fatigue.

“The squad is not big, some players are injured then we had also three players suspended in the middle match between Christmas and New Year. Now we recover some players, but we lose others, so of course there is fatigue.