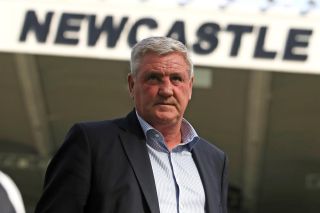 Allan Saint-Maximin has been tipped to light up Newcastle’s Premier League campaign – at the same time as boosting the fines pot.

The 22-year-old French winger, a £16million summer signing from Nice, is as flamboyant off the pitch as he is on it and after recovering from an early hamstring injury, has started to show flashes of his unpredictable talent.

Head coach Steve Bruce said: “He’s only 22 and he’s got more outfits than I’ve seen. He’s different and I’m sure at times he’s going to cause me a few problems. But in all of that, deep down, he’s a decent kid.

“He’s okay, a bit different, but we all have to manage these different individuals, and he’s certainly one.

“He likes an ear-ring. He gives me £100 every other day when he forgets to take it out! In that respect, I’ve got a few quid off him already.

“But he’s a good kid, he’s all right. The players like him. He’s daft, he’s off the wall and he’s likeable.”

The Magpies have a rich tradition of mercurial French midfielders with David Ginola, Laurent Robert and Hatem Ben Arfa having thrilled the Toon Army in recent years, and Bruce is hopeful Saint-Maximin can inject a little more of the magic his side has lacked at the start of the Premier League campaign.

He said: “He is the one we can rely upon to do something different. Even the goal we scored against Manchester United, he picked it up and drove forward and within 10 yards, he’s beaten four of them.

“He does give us something off the shelf. He can cause anybody problems.”

Saint-Maximin’s next chance to impress will arrive against Wolves on Sunday, when Bruce comes up against a club he might have managed on two occasions.

He spoke to Wanderers’ current owners before he took his last job at Aston Villa, but was closer to the hot-seat after Mick McCarthy left in 2012.

He said: “I had shaken hands with the previous owner, Steve Morgan. I must have been out of work then after Sunderland.

“In fact, it was February 23 because it was our anniversary and I took my wife to see War Horse thinking that we’d got a job. We had a glass of champagne afterwards as well!

“He rang me at midnight and said, ‘I’ve changed my mind’, and they gave it to Mick’s assistant, Terry Connor.”