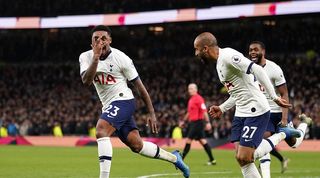 Steven Bergwijn has described his Tottenham debut as "unbelievable" after the Netherlands international helped his new side beat Manchester City 2-0 on Sunday.

Spurs paid around £27m to sign Bergwijn from PSV in the final week of the transfer window.

Jose Mourinho included the winger in his starting XI for the visit of City at the weekend, and the 22-year-old responded with a wonderful chest-and-volley opener.

And Bergwijn has admitted that he almost broke down in tears after getting his Spurs career off to the perfect start.

“It’s pure emotion, unbelievable,” he told Tottenham's official website. “This feeling... it’s a dream for me to make my debut and score against Manchester City, yes, unbelievable.

“It was a corner, the ball came to Lucas [Moura], he gave the ball to me, my first touch was good, and I had to shoot directly, I saw the ball go in and I almost cried!

“As soon as the ball left my foot, I had the feeling it was going in. Then the guys jumped on me. I had no time to do my celebration. It was amazing.

“It was very hard, especially the first half, very difficult. After that, I thought we played well. I had to work hard but he [Mourinho] told me ‘when you’re dead, you’re dead’, so I gave everything. It’s an unbelievable feeling, fantastic. I hope it’s the first of many.”

Mourinho also heaped praise on his new signing, who put pen to paper on a five-and-a-half year contract in north London.

"It was a debut goal that was the icing on the cake of a very good performance,” said Jose. “Independent of the goal, I would say his performance was very good, very solid, very mature.

“We worked hard during the week. He came to us Tuesday, so he had a complete week to work and to try as fast as possible to understand what we wanted from him.

“It was a very solid performance against such a difficult opponent like Kyle Walker, but then he was clever enough to appear also in other zones and try to create some problems for City.

"Defensively, very aware of his position, defending zonal, covering spaces. So very, very good and then of course the goal is a great goal, so important for us.”

Spurs return to action against Southampton in an FA Cup fourth round replay on Wednesday.