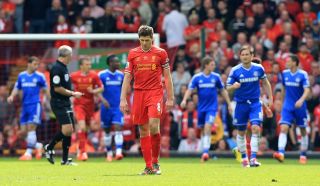 Steven Gerrard says he still regrets his costly slip in Liverpool's 2-0 defeat by Chelsea in April 2014.

Brendan Rodgers' side were challenging for the Premier League title that season, but a loss at home to the Blues handed the initiative to Manchester City.

Gerrard miscontrolled a pass from Mamadou Sakho and then lost his footing, allowing Demba Ba to open the scoring in the first half.

Willian then added a second goal late on to end Liverpool's 11-game winning streak, and City went on to claim the prize.

Gerrard ended his Liverpool career a year later without having won the Premier League title with his boyhood club, and the Rangers boss admits he still thinks about the incident almost six years on.

"I think about it most days, a Liverpool team winning the league would help how I feel for sure," he told The Greatest Game with Jamie Carragher.

"People say to me to make me feel better: ‘It was over 28 games’, but I still know behind what you're saying to me that moment was so big.

"Brendan said recently that Jordan Henderson’s suspension killed us and it did… an own goal that Kolo Toure scored when we were winning at West Brom and drew the game and lost two points.

"All little things like that during the season, but it wasn't at that time, that moment against that team, so that's still behind all those people trying to soften it up for me.

"I think winning the league would definitely play a part. And I think also my own personal stuff with Rangers, if I go on to have a successful season, I think that will help as well, because that was a f*cking tough moment, even tougher than what people probably think it was. The only time in a 20-year career I’ve been numb, like my body's felt numb."