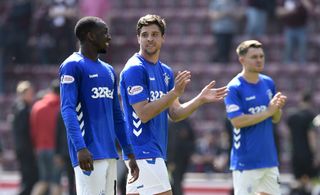 Steven Gerrard has backed Matt Polster to be Rangers’ surprise package in the months to come.

The American international was finally handed his Gers debut as a late substitute in Saturday’s 3-1 win over Hearts in Edinburgh.

It has been a long wait for the former Chicago Fire defender, who first arrived on trial back in December before eventually sealing a deal stretching to 2021 six weeks later.

But the travelling Light Blues faithful made sure to give the 25-year-old a warm welcome when he climbed off the bench for the final three minutes at Tynecastle as they chanted ‘USA, USA, USA’.

And their manager believes Gers will find they have hit the jackpot with the Las Vegas-raised right-back – who can also operate in midfield – as Gerrard predicted big things for Polster.

The Ibrox boss said: “The idea with Matt was to get him in, get him settled in the city.

“He has settled down really well, has performed really well in the reserve team and the idea was always to get him in before the end of the season and then get a strong pre-season into him to get him ready for next year.

“He is a good player – I think he might surprise a few.”

While Rangers were celebrating their seventh straight win against the Jambos and their third in a row since last month’s Old Firm defeat, Hearts boss Craig Levein was left fuming at his William Hill Scottish Cup finalists’ failure to compete for the ball left their guests on Gorgie’s easy street.

Jermain Defoe and Ryan Jack were both allowed to score before half-time after Gers robbed Hearts of possession in midfield.

Nikola Katic slid home a third from a corner just three minutes into the second period and the display has left Tynecastle chief Levein to rethink his plans for next month’s Hampden showdown with Celtic.

Midfielder Peter Haring is now rated as a major doubt for the May 25 showpiece after sitting out the Rangers clash as his groin problem flared up once more.

But there was some good news on a disappointing day as teenager Harry Cochrane made his first appearance since December when he was given the last 25 minutes off the bench.

“Right now I don’t know who is playing in the final so there are opportunities there for people to stake a claim,” warned Levein.

“Harry had had five different injuries and has taken a while to get himself back, and I need to be careful with him.

“He is not the most robust of players and, although he is a tough wee bugger, he is not physically capable of defending himself.

“With the injuries and his bodyweight not quite being where it should be, I’ve kind of been looking after him a little bit. But he did quite well when he came on and I’ve got enough faith in him to know that if I put him into the final he would deal with it no bother.

“Will Peter be okay for the final? I don’t know. He has a groin issue. He previously had a double hernia not so long ago and the physio and doctors aren’t sure it’s related. I’m hopeful and he does help us for sure.”