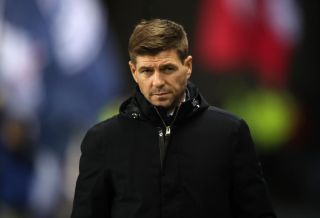 The Light Blues boss has focused on trimming his squad this month, with Eros Grezda, Andy King and Jamie Murphy all departing.

But Gerrard is now ready to dip back into the market after seeing Jermain Defoe stretchered off against Ross County with a calf injury.

The striker scored the opener against the Staggies before laying on Scott Arfield for the second but left his boss worried after slumping to the turf an hour into the Ibrox victory.

Gerrard said: “In general, I’m confident we could add before the window closes. We will also assess Jermain’s situation and go from there.

“I’m concerned about Jermain but I don’t know how long the injury will keep him out.

“I don’t think it’s as bad as going off on a stretcher makes it look. He’s walking about in the dressing room.

“He’ll be scanned in the next 24 hours and we’ll know more about it then. But he has got a calf injury – whether it will be a week, two weeks, three or four weeks, I don’t know.

“Could we look to bring in fresh cover? Possibly. I haven’t spoken to Ross Wilson about that situation yet. We have a couple of things brewing besides that.

“It might alter a few things, it depends on the extent of the injury. We’ll decide from there.”

Gerrard says he has yet to receive interest in wingers Brandon Barker and Jordan Jones.

“Not that I’ve heard” he said. “We haven’t had any calls or bids for those two.”

Rangers got back to winning ways after Sunday’s 2-1 defeat to Hearts at Tynecastle to ensure the gap on leaders Celtic remained five points having played a game less.

“It was better than the weekend but I think we can still go through the gears and perform better,” he said.

“There are still areas where we can improve individually and collectively. But it’s a positive performance and a lot better than Hearts.

“We will need to raise our level but it was a flat couple of days and to get back on the horse with a win was what we needed.”