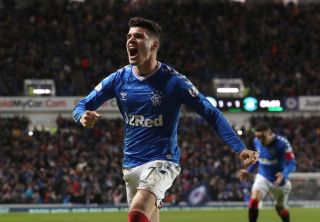 Steven Gerrard admits containing the hype around Ianis Hagi will be a struggle after seeing the new Rangers midfielder open his Ibrox account.

The Light Blues boss has pleaded for the Rangers support to show Hagi – son of Romania great Gheorghe – patience following his arrival on loan from Genk.

But the fans’ excitement levels have gone into overdrive after seeing the 21-year-old fire a late winner against Hibernian on his first start, leaving Gerrard to laugh: “He hasn’t helped me there, has he?

“It was a fantastic finish. Looking back on the game you can see him coming to terms with the physicality up here in Scotland and getting used to the speed and the pace of the first half.

“What impressed me the most was that even when we went 1-0 down and at 1-1 when the crowd was getting a little bit edgy, he had the bravery and character to go receive it in any situation.

“It was him who was pushing to be the difference. I’d asked that of him and some others at half-time and I certainly got the response I was after.

“I’m sure people are going to get carried away now because he’s scored the winner on his first start.

“But he still will take time to adapt to all the different venues and teams we come against. He’s certainly a talent.”

There was some meaty challenges dished out to the 10-cap Romania international on Wednesday night but he brushed himself off and rifled home the winner with six minutes left as Rangers kept their title charge on track with a 2-1 victory.

And Gerrard has no doubt his new signing can cope with the rough and tumble in Scotland.

He said: “It will be slightly different in Scotland to the league he has played in. In Belgium, it’s slightly more technical and less aggressive than in Scotland.

“But it is what it is. He was aware of it before he arrived. He’s actually got a better build than he looks, he’s a very strong lad.

“So he’ll be fine. He kept getting back up and that’s the impressive thing about him. Other people in that situation might have gone missing but he rolled his sleeves up and got on with it.”

The victory over Hibs prevented Celtic disappearing over the horizon, with the Hoops still seven points ahead having played a game more.

This weekend, Gerrard’s team turn their focus to Hamilton in the William Hill Scottish Cup.

But the former England midfielder insists he is not placing greater focus on the second domestic knock-out competition after seeing his team slip behind their bitter rivals in the league, having already suffered Hampden heartache at the hands of Celtic in the Betfred Cup final.

He said: “This would be significant even if we had won the League Cup. This is a club that demands that you give everything in every competition, you can’t pick and choose.

“That’s what we’ll be doing tomorrow. We’ll be going to Hamilton in decent shape, certainly on the back of the second-half performance against Hibs which was extremely positive and very close to where we’ve been for most of the season.

“Hopefully we can take off from there.”