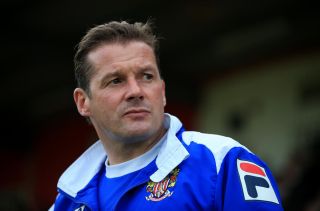 Westley is said to have left his car in Welwyn – approximately five miles on foot from the Lamex Stadium – but his pre-match jog went unrewarded thanks to Pope’s spot-kick.

SPRINTING towards kick-off like… ⚡ With today's traffic problems, the Gaffer left his car in WELWYN & ran to the ground! 💪 #WeAreStevenagepic.twitter.com/IGzFd0K3kX— Stevenage FC 🔴⚪ (@StevenageFC) January 11, 2020

Stevenage goalkeeper Paul Farman pulled off a string of fine saves to keep the hosts in the game, denying David Worrall twice in the opening eight minutes.

At the other end, Vale stopper Scott Brown produced a super stop to keep out Kurtis Guthrie, before denying Terence Vancooten’s long-range strike.

Vancooten squandered a great chance after the break when he failed to convert a free header, while Farman did well to keep out Tom Conlon’s free-kick.

With just two minutes to go, Conlon was hauled down inside the box and Pope sparked jubilant scenes among the visiting fans as he made no mistake from 12 yards.