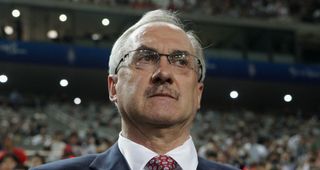 Uli Stielike has been relieved of his duties as South Korea head coach following their surprise 3-2 defeat to Qatar in World Cup qualifying on Tuesday.

Stielike led South Korea on 37 occasions after replacing Hong Myung-bo in September 2014 but the seventh loss of his tenure has cost him his job, the Korean Football Association (KFA) confirmed on Thursday.

Under the German, South Korea reached the Asian Cup final in 2015 only to be beaten by Australia 2-1 after extra time.

They got over that disappointment quickly and were unbeaten in the second round of qualifying for World Cup 2018, but they have struggled for consistency in the final section, losing three of their last five matches.

The latest defeat came in Doha on Tuesday as Qatar – who cannot qualify for the tournament in Russia – sprung a surprise, the reversal leaving South Korea only one point ahead of Uzbekistan in third.

With only the top two guaranteed a place in the finals – and Iran having already sealed the first spot – the KFA have opted for a change ahead of their two final games – against Iran and rivals Uzbekistan.