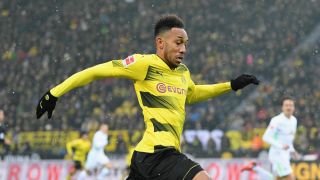 Borussia Dortmund coach Peter Stoger wants Pierre-Emerick Aubameyang's future to be resolved as soon as possible amid interest from Arsenal, but is unsure whether it will happen "in the next few days".

Dortmund announced at the weekend they had received a bid – believed to be to the tune of €50million – for Aubameyang from Arsenal, who on Monday announced the arrival of the Gabon international's former team-mate Henrikh Mkhitaryan in a trade for Alexis Sanchez with Manchester United.

BVB are thought to be holding out for a fee in excess of €60m for the the 28-year-old, who has been dropped for the club's last two Bundesliga games as questions over his future intensify.

Stoger has consistently left the door open for Aubameyang to regain his place in the line-up and the striker was involved in first-team training on Monday.

The coach was unable to provide an update on Aubameyang's future, but hopes it will be sorted quickly.

"Of course, we'd like there to be a resolution tomorrow, whatever it was," said Stoger.

"Everything that is clarified does everyone good in their lives. But if it takes longer then it will take longer.

"I cannot say if anything will happen in the next few days."