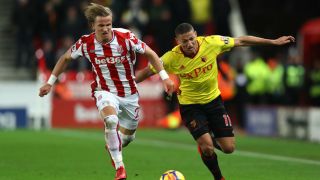 The Premier League's muddled priorities on an action-packed deadline day were borne out at the bet365 Stadium as Stoke City introduced their brand-new signing amid the dismal distraction of a 0-0 draw against Watford.

Badou N'Diaye is the new man for the Potters, having signed in a €16million deal from Galatasaray, and it may be hoped that the midfielder can provide a spark after this soporific contest.

The Hornets sacked Marco Silva, accusing him of being distracted by interest from Everton, but Javi Gracia's arrival does not appear to have inspired them on the evidence of their FA Cup elimination to Southampton and this match, in which they created next to nothing.

Not that Stoke were any more free-flowing. The introduction of Peter Crouch briefly sent pangs of panic through the visiting defence, but there was little to leave Chelsea officials ruing signing Olivier Giroud ahead of the veteran.

The best chance of the game fell to Abdoulaye Doucoure midway through the second half, Stoke captain Ryan Shawcross denying him with some last-ditch heroics, but the game looked destined for eternal goallessness.

A point lifts Stoke out of the bottom three and the Premier League's leakiest defence has kept consecutive clean sheets under Paul Lambert, but safety could depend on improvements further up the pitch.

The first half passed by almost entirely without incident. Only Eric-Maxim Choupo-Moting curling a shot across the face of goal for the hosts and Richarlison turning a Gerard Deulofeu cross over at the other end will have done anything to warm those at the bet365 Stadium.

The home fans were lifted at the interval as N'Diaye paraded around the pitch, having put pen to paper on a four-and-a-half-year deal.

A back-pass masquerading as a Doucoure shot had summed up a lifeless first half but the second began with more vigour. Christian Kabasele fired up the hosts when he collapsed to ground clutching his face after being shoved in the chest by Mame Biram Diouf, who was shown the yellow card his adversary perhaps deserved.

Joe Allen fired over as Stoke found another gear and Lambert looked to grasp the nettle, replacing Charlie Adam with Crouch.

The big man had an immediate impact as his presence prompted Sebastian Prodl into a weak header towards his own goal that Xherdan Shaqiri pounced upon, but the Swiss fired straight at Orestis Karnezis and Crouch's tame follow-up was gathered by the Greek.

A rare Watford foray forward then provided the game's closest thing to a goal, Doucoure checking inside Kurt Zouma neatly, only for Shawcross to hurl himself at the ball.

Jack Butland made his first meaningful save to scramble Roberto Pereyra's shot away, but there was no saving a wretched occasion - with the drought-embattled Saido Berahino's late introduction as fitting as it was ineffective.