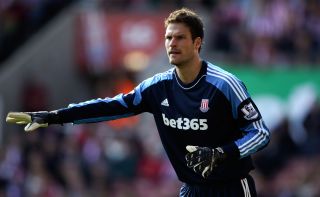 The 26-year-old has been linked with moves to fellow Premier League sides Liverpool, Manchester United and Chelsea in recent transfer windows.

Stoke have thus far managed to resist those overtures for a stopper Coates considers as the best in the top flight.

But he concedes there may come a time when Stoke have to allow the former Portsmouth man to leave the Britannia Stadium.

"You always have to be realistic about these things," he told The Sentinel. "If a call came from a top European club and was attractive to him, then you have to look at it.

"It wouldn't be much of a surprise to me and that's why we have contingency plans in place with other goalkeepers at the club.

"We would be reluctant to sell him because you want to keep your best players, but equally you are realistic about things. You also have to consider the player's view.

"I feel he's as good as anybody in the Premier League. I don't know anyone who is better."

Begovic has the opportunity to improve his stock further when he lines up for Bosnia-Herzegovina, who have the chance to clinch a spot at the FIFA World Cup, against Lithuania on Tuesday.

Safet Susic's side lead Group G of the European section of qualifying on goal difference, and if their result betters that of Greece - who host Liechtenstein - they will progress automatically to Brazil 2014.

And Coates says everyone at the club would be thrilled for Begovic if that scenario occurs.

He added: "We would all be delighted to see him do it because he's such a good guy, a highly intelligent person and a top professional footballer.

"He has such an attractive personality, while he also remains focused on becoming a top goalkeeper."