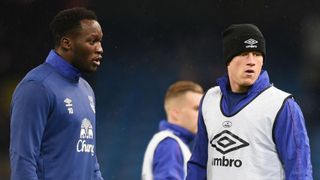 Everton manager Roberto Martinez has insisted that the likes of John Stones, Romelu Lukaku and Ross Barkley will not leave Goodison Park this month.

England defender Stones was the subject of sustained transfer interest from Chelsea during the close-season, while reports suggest Manchester United are now targeting the 21-year-old.

Barkley once again finds himself linked with a big-money move to Manchester City and Lukaku, with 19 goals in 27 club matches this term, has previously stated his ambitions to play Champions League football.

But, fielding questions surrounding the future of his prized assets ahead of Saturday's Premier League match against Swansea City, Martinez was adamant that there would be no high-profile outgoings in January.

"We could go on and on - maybe you'll take three hours talking about our young players," he said.

"None of our young players who have been performing well will leave in January - January is not a window to bring instability.

"It will take you three hours because we have a long, long list and we look forward to them playing until the end of the season and enjoying their football."

Asked whether all players had a price, in light of the astronomical figures reported in association with Stones, Lukaku and Barkley, Martinez replied: "Not in January. We are not even going to consider looking at [selling] a member of our squad who is important now and important until the end of the season."

Martinez believes Lukaku can achieve his goal of playing Champions League football with Everton and refused to view transfer rumours concerning his star striker in a negative light.

"With Rom the only thing that interests me is his next target," Martinez continued. "He wants to score goals and get better.

"Over the last 13 months you've seen an evolution in his play that has been quite magnificent. He is about to play 100 games for Everton, which is an incredible landmark for the age he is.

"I want him to carry on with his important role in the team. Whatever the talk is from the outside, it is all positive. You don't get that sort of reaction if you are not playing well."