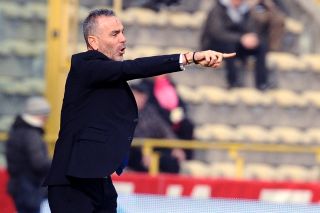 The 48-year-old - who was appointed in October 2011 - has been dismissed by the Emilia-Romagna outfit following their 2-0 loss to bottom side Catania on Monday.

That defeat left Bologna just one point above the Serie A relegation zone in 17th place, having recorded just three league wins all season.

A statement on the club's official website read: "Bologna announces that in light of our latest disappointing results, the club has been forced to dismiss coach Stefano Pioli.

"We want to thank Pioli and his staff for the work done in the past few years.

"We will announce his successor in the coming hours."

Bologna will attempt to pull away from the relegation zone with a win over Lazio at the Stadio Renato Dall'Ara on Saturday.

Pioli's sacking is the second in Serie A this month after Lazio dismissed Vladimir Petkovic in the aftermath of the 50-year-old agreeing to become Switzerland boss in July.