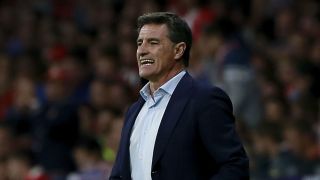 Michel arrived at La Rosaleda in March 2017 with the club in the midst of a fight against the drop, but helped them recover to an 11th-place finish.

However, it has been another season of struggle for Malaga, who have just three wins and 11 points from 19 LaLiga matches.

A 1-0 defeat to Getafe on Friday proved the final straw, with Michel's dismissal announced on the club's official website.

"Michel Gonzalez arrived last season during a very difficult situation, and the coach was able to turn things around and end the season in a mid-table position," a club statement read.

"Unfortunately, since the beginning of this campaign, the team has been unable to achieve a string of good results to move out of the relegation zone, and the club deems this action necessary to seek that reaction."

Michel has previously coached Getafe and Sevilla, before spells at Olympiacos and Marseille.

Malaga return to action with a trip to Eibar on January 22.