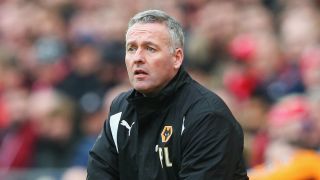 Stoke City have appointed Paul Lambert as their new manager on a two-and-half-year deal.

Lambert replaces Mark Hughes, the Welshman having been sacked following a run of eight defeats in their last 11 games in all competitions, the final straw a humiliating loss to League Two Coventry City in the FA Cup third round.

Stoke visit Manchester United on Monday, with Lambert set to take a watching brief from the stands before taking charge for a potentially crucial home fixture with Huddersfield Town on Saturday.

The Potters travel to Old Trafford third bottom in the Premier League and a point adrift of safety.

Stoke City are delighted to confirm the appointment of Paul Lambert as the Club’s new manager. January 15, 2018

And the club's board have decided that Lambert, who guided Norwich City from League One to the top flight before disappointing spells at Aston Villa, Blackburn Rovers and Wolves, is the man to preserve their status in the division.

Club chairman Peter Coates told Stoke's official website: "Paul greatly impressed us with his knowledge of our squad and had a clear plan of how he would improve our results.

"He's a man who backed himself as a player, none more so than when he turned down contract offers in Scotland to go on trial in the German Bundesliga with Borussia Dortmund, and it's obvious he adopts the same approach as a manager."

Joint-chief executive John Coates added: "Paul has been successful in management at clubs with a strong and stable background and with local ownership – the kind of foundation we are able to give to our managers.

"We were determined to appoint someone with Premier League experience or an extensive knowledge of English football. We look forward to working with Paul and supporting him to help achieve our goals."