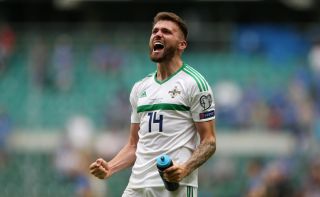 Stuart Dallas believes winning Thursday’s friendly against Luxembourg is vital to Northern Ireland’s hopes of getting a result in Monday’s crunch Euro 2020 qualifier against Germany.

Michael O’Neill’s side started their qualifying campaign with a perfect 12 points from 12 against Belarus and Estonia, but know the bigger challenges are to come against Germany and Holland.

Thursday’s friendly at Windsor Park could easily be overlooked but Dallas believes momentum is key.

“It’s a game we want to win,” Dallas said. “We’ve won four on the bounce now and we want to continue that winning feeling because it brings confidence.

“It also keeps that momentum going so we want to win against Luxembourg.”

Dallas has grown used to the pressure of expectation at Leeds as they continue to pursue promotion to the Premier League, but he said there is a similar feeling around Northern Ireland these days following their recent successes in reaching Euro 2016 and almost qualifying for the last World Cup.

“I think that has changed in recent years and now there are games we are expected to win and I think that’s because we’ve had success,” Dallas said.

“That’s always good and it’s a good pressure to have.”

Germany will bring star power with them to Windsor Park but Dallas said Northern Ireland would not be overawed by a team that has seen its world ranking slip to 15th – a relative slump given they were number one as recently as June 2018.

“We definitely don’t fear them, we respect them,” Dallas said. “We are under no illusions about how difficult it’s going to be, it will be difficult.

“I think we have to believe we will get something from the game, there’s no point in just having hope. I’m sure a sold out Windsor Park will be bouncing.

“As an opposing player, that can be intimidating and the fans will play their part.

“In the home games you definitely always have a chance.”

The versatile Dallas is likely to start at right-back for Northern Ireland, particularly given the injury which has ruled out Michael Smith, and the 28-year-old seems to have found his home in the position.

“That’s where I’ve been transformed to,” he said. “I’m a full-back now or a wing-back.

“I probably would. I think the game is changing. As a winger, it has changed for me and I feel more comfortable now as a full-back or wing-back.

“At the end of last season, I was playing on the left in the play-offs as a left-back because we had a few injuries, but I’ve moved over to the right now.

“I’m just happy to be playing, to be honest.”

Leeds picked up 13 points from their opening five league games of the season but signed off before the international break with a frustrating 1-0 loss to Swansea.

“Obviously coming away on an international you’re coming into a different environment and you have to leave whatever’s happening at your club behind,” Dallas said.

“When you get beat, you just don’t forget about it, but we have to turn our attention to these two games and two good games to be involved in.”