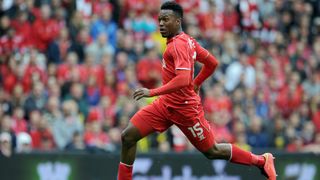 Sturridge has endured an injury-ravaged 2014-15 campaign, having not appeared since August due to a combination of calf and thigh injuries, but the England international is set to feature at Anfield this weekend.

The 25-year-old, who underwent treatment in the United States with the Boston Red Sox, has been at the centre of taunts questioning his physical and mental stability.

Sturridge is aware of the critics but the former Chelsea man is backing himself to enjoy a prolonged clean bill of health.

"I know they say I'm fragile. I could say a lot of things about other people's lifestyles, but who am I to judge someone else's life?" Sturridge told The Mirror.

"I've had my spell now, and I am hoping I can push forward from this point. I know I get stick. All I am saying is anyone can have an opinion, they can ­broadcast their opinion, but I have faith in myself, I have faith and support from my team-mates, and my family give me support.

"I’m grateful to God for all I've been given, I am not stressing about anything any more. I only listen to the opinions of people I care about.

"Everyone has opinions on ­everything in life, it's just opinions."