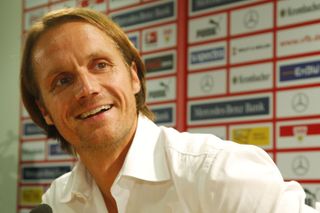 The 40-year-old spent 12 years with Stuttgart during his playing days after graduating from the German club's academy, and had been coaching the Under-17 team following his retirement.

But he has now been handed a promotion to first-team duties, after Labbadia paid the price for disappointing start to the new campaign.

Stuttgart have lost all three of their opening Bundesliga fixtures and are currently only being kept off the bottom by newly-promoted Eintracht Braunschweig.

The Mercedes-Benz Arena outfit also trail 2-1 on aggregate to Rijeka in the sides' UEFA Europa League play-off, having suffered defeat in the first leg in Croatia.

Fans will hope that Schneider, who enjoyed a solid career with the club as a player, can now turn things around.

The former defender won the Bundesliga and DFB-Pokal with Stuttgart, and also helped them to the UEFA Cup Winners' Cup final where they suffered defeat at the hands of Chelsea.

Schneider's first game in charge will be Thursday's return leg against Rijeka.