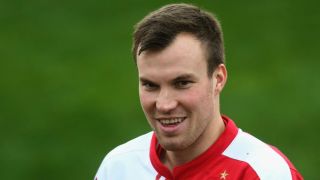 Stuttgart have completed the signing of Kevin Grosskreutz from Galatasaray.

The versatile Germany international joined Gala from Borussia Dortmund last September, but the Turkish champions were unable to register the World Cup winner until January after failing to beat the Super Lig transfer deadline.

Their appeal to FIFA was unsuccessful and Grosskreutz now leaves for Stuttgart having not made a single appearance for Gala.

Grosskreutz had been linked with a reunion with former Dortmund coach Jurgen Klopp at Liverpool, but instead joins a Stuttgart team who sit just a point above the automatic relegation places and level with Werder Bremen - who occupy the relegation play-off spot - in 15th.

"The anticipation to achieve our common goals with VFB is enormous," Grosskreutz told Stuttgart's official website.

"I am looking forward to my new job and getting to know the whole team."