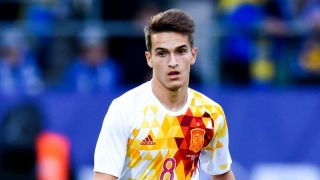 Denis Suarez is over the moon with his return to Barcelona and has vowed to give his all to succeed at Camp Nou.

The Spain international, 22, joined Barca from Manchester City in 2013, but spent 2014-15 on loan at Sevilla before he was sold to Villarreal last year.

However, the Liga champions announced on Monday that they have exercised their option to buy back the attacking midfielder for €3.25 million and he is ready to prove his worth in Catalunya.

"I am very happy to return to the best team in the world," Suarez told the official Barcelona website.

"Ever since I left, I have been wanting to return, and now my dream has come true.

"My time at Sevilla and Villarreal has helped me mature as a player and as a person. Now I am ready to make the jump.

"I'll give everything I have to succeed at Barca. It's only a good thing that there is a lot of competition for places."

Suarez passed his medical on Tuesday and will sign a four-year deal on Wednesday, with an option for an additional season.