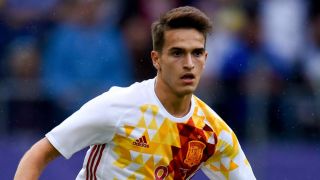 Denis Suarez is not intimidated by the prospect of trying to gain first-team opportunities at Barcelona and does not understand why any player would pass up a move to Camp Nou.

Barca activated a buy-back clause to bring Suarez, formerly on the books of Barcelona B, into their squad following an impressive campaign with Villarreal.

Luis Enrique has so far been frustrated in his attempts to bring in a recognised striker to further bolster the LaLiga champions, with the reality of playing second-fiddle to the majestic front three of Lionel Messi, Luis Suarez and Neymar probably as much of a hindrance as a help.

But 22-year-old playmaker Denis Suarez believes Barcelona's style will mesh perfectly with his own and he is relishing the chance to make his presence felt.

"Pre-season is going well," he told reporters during Barcelona's training break at St George's Park. "It's different to the ones I had with Sevilla and Villarreal because here we work on the pitch all the time and a player of my style appreciates that.

"[Luis Enrique] demands a lot of us and constantly speaks to us. He has spoken with me a lot and has shown that he has confidence in me.

"I didn't have any doubts as I always wanted to come here. To anyone who does have doubts I would tell them that Barcelona is the best team in the world to play for and to be a part of.

"In the best teams there are always many players for each position. I have come here to help and to compete to play as often as I can. I will try to make the most of my opportunities."

Forward Munir El Haddadi has found such chances to be at a premium but he is not ready to seek a new challenge despite Luis Enrique's ambition to further strengthen his attack.

"Whoever arrives will be welcome because I'm sure they'll come to risk a lot," he told reporters. "I would only leave if the club asked me to go.

"From the first day I came up to the first team until now I have [felt valued]. The club looks out for me, helps me and I am very happy."

Munir added: "I will keep working and will talk about that with the coach. Whatever has to happen will happen.

"Because [I am flexible in position] I don't know what will happen. Obviously I would like [more playing time] and I will give everything I have to earn it."