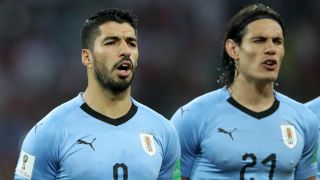 Luis Suarez admits Uruguay face an anxious wait to see if Edinson Cavani will be fit to face France in the World Cup quarter-final, although he is confident they can cope without him.

The Paris Saint-Germain striker suffered a hamstring injury in the last-16 win over Portugal and was the only player not to take part in team training in Nizhny Novgorod on Tuesday.

Suarez himself picked up a knock in that session but later appeared in front of the media with no obvious discomfort, which will calm fears he too could miss the clash with France.

When it comes to Cavani, though, Suarez says it is unclear at the moment whether he will be able to face Didier Deschamps' side.

"I include myself in the three million Uruguayans waiting for Edi," Suarez told a news conference.

"I know it's complicated because the injury isn't easy and because there are few days left to recover, but I know that the desire, the attitude and the commitment he'll have to be there, although it doesn't depend much on him."

4 - Since 1966, only Grzegorz Lato & Andrzej Szarmach (5 for Poland) and Michael Ballack & Miroslav Klose (5 for Germany) have combined for more World Cup goals than Edinson Cavani & Luis Suarez (4 for Uruguay). Combinations.June 30, 2018

Cavani scored both goals in the 2-1 victory over Portugal last Saturday, having netted 10 times in 15 appearances in qualifying to send Uruguay to Russia.

Both the former Napoli forward and Suarez missed the first two qualifiers against Bolivia and Colombia back in 2015, but Uruguay won those games comfortably, without conceding a goal.

And Suarez says such results have shown that Oscar Tabarez's side do not depend solely on their two star forwards.

"He's essential, because of the kind of player he is, for what he has shown in every match he has played for the national team, not to mention in the present moment," he said. "The two goals he scored the other day, the team work he has in general, his physical exertion... all of it is important.

"This is a World Cup and Edi's form is very important, but there are players who can do it in the same way, and we hope even better than him. Things don't depend on just one player. Uruguay have shown we depend on collective work on the pitch."