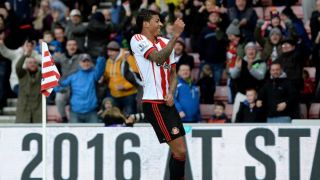 Patrick van Aanholt’s second goal in as many Premier League matches rescued a point for Sunderland in their relegation clash with AFC Bournemouth.

Van Aanholt, who learnt in midweek that the league’s Goal Accreditation Panel had taken away his strike at Swansea earlier in January, responded in perfect fashion with a fine finish in first-half stoppage time to cancel out Benik Afobe’s opener for the visitors at the Stadium of Light.

Given Sunderland’s propensity to concede in the opening 15 minutes of matches and Bournemouth’s prolific record in the early stages, it was perhaps unsurprising that Afobe nodded the Cherries in front inside 11 minutes.

The striker netted his side’s eighth early strike of the Premier League campaign – and the ninth shipped by Sunderland in the first quarter-hour of matches this term – to ensure Eddie Howe’s men flew out of the traps.

The away side remained in total control until the 30-minute mark and should have been out of sight prior to the Black Cats’ equaliser but after the interval the hosts returned with renewed enthusiasm.

Artur Boruc was the busier of the two goalkeepers in the second period, as Adam Johnson, Jermain Defoe and Billy Jones all tried their luck, but the two teams had to settle for a share of the spoils.

Sunderland never looked like taking anything from the game during the opening stages, however.

Afobe was a matter of inches away from turning home Dan Gosling’s cross in the 11th minute, as Bournemouth enjoyed the better of the territory and possession, but the £10million signing from Wolves did convert his next chance less than two minutes later.

Stanislas swung in a cross from the right and Afobe stooped to head past Vito Mannone from 10 yards for his second goal in Cherries colours.

Mannone beat away Stanislas’s fierce strike midway through the first half, as the visitors continued to dominate, while Afobe’s shot was kept out by the home stopper when a pass to the unmarked Stanislas was the better option for the Bournemouth striker.

It took until the 33rd minute for Sunderland to muster their first effort on target, with Boruc flinging himself to his left to deny John O’Shea a first Premier League goal since December 2013, and Boruc was in action again in first-half stoppage time to claim Fabio Borini’s deflected shot from the edge of the box.

Despite being second best for most of the opening period, the Black Cats did find an equaliser before the break.

Borini’s tidy throughball played in Van Aanholt down the left and the Dutchman powered a strike past Boruc at his near post.

The goal gave Sunderland new-found belief and they began the second period with confidence. Johnson’s speculative volley looped into Boruc’s hands 10 minutes after the restart, while Defoe shot wide from 30 yards.

Jones then brought out a good stop from Boruc with a header from Johnson’s left-wing cross, as the home side enjoyed the better of the chances, but it was visiting substitute Lewis Grabban who spurned a golden opportunity to win the game late on.

The recent signing from Norwich was played clean through with eight minutes remaining but failed to hit the target, ensuring the two teams had to make do with a point each in their battle to avoid the drop.

- No defender has been involved in more goals this season than Patrick van Aanholt (5 – three goals, two assists).
- Van Aanholt is the first Sunderland defender to score in back to back Premier League games.
- Fabio Borini registered his first Premier League assist since doing so for Liverpool away at Sunderland in January 2015.
- Bournemouth have kept back to back away clean sheets for the first time in the Premier League.
- Bournemouth have dropped the most points from winning positions this season (14).