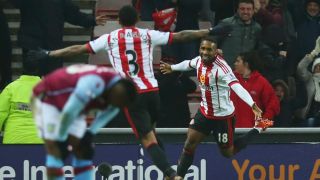 Jermain Defoe scored twice as a 3-1 victory over Aston Villa breathed new life into Sunderland's fight to avoid relegation and pushed Remi Garde's side closer to the Premier League trapdoor.

Villa were the better side for long periods at the Stadium of Light, frustrating the home team and fans alike.

But Garde's side lacked the cutting edge provided by former England striker Defoe, who scored in the 72nd minute and then again in stoppage time as Sunderland ended a run of five successive defeats.

Defeat for Villa, for whom Carles Gil cancelled out Patrick van Aanholt's deflected opener, leaves them 11 points from safety and without a league win in 19 games.

The hosts started brightly – Duncan Watmore lashing a third-minute effort over the bar – before Villa gradually took control with Leandro Bacuna particularly prominent, firing two efforts in two minutes, both with his left foot, off target.

Bacuna was causing Van Aanholt plenty of problems down the Villa right and he almost created the opening goal with a positive burst down the wing before crossing for Jordan Veretout, whose low shot was saved superbly by Vito Mannone.

Villa remained the better side with the hosts' tactic of aiming long balls towards 5ft 7in Defoe proving unsurprisingly unproductive.

But just as the home crowd were starting to show their displeasure, the Black Cats took the lead.

Van Aanholt strode forward from the back and his 25-yard shot took a wicked deflection off Micah Richards to wrongfoot Villa goalkeeper Brad Guzan.

Former Chelsea full-back Van Aanholt almost added a second on the stroke of half-time with a 20-yard free-kick which whistled inches wide of Guzan's left-hand upright and remained Sunderland's most effective attacking outlet after the break, flashing another curling effort wide.

By then, Villa had introduced Adama Traore and the former Barcelona winger's pace and direct approach provided a swift dividend after 63 minutes.

Traore claimed possession deep inside his own half after Fabio Borini was caught on the ball and surged forward with Sunderland players opting not to bring him down and risk a caution. His cross from the right still gave Gil plenty to do, but the Spaniard adjusted his body superbly to hook the ball past Mannone on the volley.

Sunderland appeared to be on the ropes and it required a moment of magic from Defoe to dig them out.

Johnson tossed a hopeful ball forward which Defoe took neatly before moving into the area and firing a low drive past Guzan at his near post left-footed.

Villa rarely threatened a second equaliser with Rudy Gestede coming closest with a low shot which Mannone had covered at his near post.

And Defoe made sure of the points deep into stoppage time, firing substitute Ola Toivonen's cross past Guzan before hitting the net for a third time shortly after, only to be denied a hat-trick by a questionable offside call.