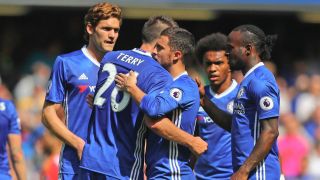 David Moyes has revealed Sunderland agreed to kick the ball out of play in the 26th minute to allow John Terry to be substituted and receive a guard of honour in his final Chelsea appearance at Stamford Bridge.

The Premier League champions cruised to a 5-1 win over the relegated Black Cats in the season finale despite falling behind inside three minutes.

But the game was little more than a sideshow to Terry's farewell, the Chelsea captain departing on minute 26 - the number he wears on his shirt - to a standing ovation as well as the guard of honour after Sunderland goalkeeper Jordan Pickford had booted the ball out.

Asked if Terry's early exit had disrupted Sunderland's rhythm, Moyes said: "A little bit. But in his own way John Terry deserves a great send-off, and he got it.

"We knew it was coming. If you look, Diego Costa asked Jordan Pickford to kick the ball out.

"I think he did it about 15 seconds too early! I don't have any problem with it, we knew it was happening."

Sunderland acquitted themselves well for long periods of the game, and Moyes expressed grievances with some of the goals that made the nature of Chelsea's triumph more emphatic.

"If you look, goal five is offside - I have seen that again," Moyes added. "Goal three is questionable, in fact on another day you would definitely see that given offside as well.

"The result is harsh on us, it feels harsh, and a little bit unjust because I think the players did well to stay in the game for a long period against a better team - champions - while we are at the bottom."

Looking back on a season that has seen Sunderland collect just 24 points - their lowest points total since the 2005-06 season - Moyes said: "It's good it's over.

"We've been squeezing every ounce out of the players, every ounce, trying to win games, trying to find a way of playing to stop the opposition and try and affect it ourselves."