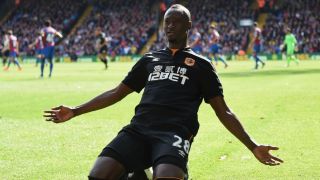 Sunderland are closing in on the signing of striker Dame N’Doye from Trabzonspor, manager Sam Allardyce has confirmed.

N'Doye, who left Hull City for Turkey following the Tigers' relegation from the Premier League in May, is on Wearside undergoing a medical ahead of what is expected to be a loan deal until the end of the season.

And Allardyce is hopeful the deal will be concluded within the next 24 hours.

"He's in the building. We're doing the usual checks to get his fitness and his medical and hopefully by the end of today [Monday] or early tomorrow we'll have clinched a deal," he said.

Allardyce hopes that N'Doye's experience of the Premier League will prove beneficial for a Sunderland side mired in relegation trouble in 19th, four points adrift of safety.

"[I hope he can bring] goals," he added. "I spoke to my old mate Steve Bruce at Hull and he said he scored five goals in 12 matches for them and really gave them something different that they didn't have.

"Bringing in a player is very difficult this time of year but he proved to make a difference in a short space of time at Hull, he's experienced the Premier League and for the first time in the Premier League last time around he scored five in 12. Hopefully he can do a bit more for us.

"Let's hope he can achieve the improvement that we're looking for in terms of converting more chances and scoring more goals."

N'Doye has struggled for form since moving to Turkey, with his only goal coming in a Turkish Cup tie against Nazilli Belediyespor.